Relaxing Chocolate is a strange name for a Kit Kat but there is a woman lounging about with some chocolate on the package. Per its name this will be a pretty relaxed review. But really that's because there really isn't much to say about it.

The Kutsurogi Kit Kat is made with slightly darker chocolate than a regular Kit Kat. They have 72 calories each. It had a nice melt and was a great break from some of the more crazy flavors but I don't know if I would recommend spending the extra money to order it from Japan when a regular Kit Kat is nearly the same. Still if you get the chance sit back and relax and enjoy a Relaxing Chocolate Kit Kat. 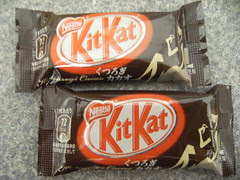 The Le Lectier Kit Kat is another example of how Japanese people like to randomly throw French phrases around. Although if you sound out the katakana next to it on the packaging you come out with "lu le ku chi e" which sounds nothing at all like French. Although to be fair my own French accent was mocked first in French class and later in France so I can't judge. Also I'm going to stop saying The Le Lectier Kit Kat because that's redundant n'est ce pas?

Anyway for those not in the know Le Lectier is a popular pear grown in Niigata making it a prime candidate for a regional limited edition. This one is not sold in the Nestle E-shop so the only way to get your hands on some is to make your way to Niigata or hope that napaJapan has some in stock. (I'm in Ohio so I got mine from napaJapan.) When it comes to fruit the pear is pretty near the bottom of the list of favorites and I never could get excited when we got pear halves with school lunch in Tahara but I tried not to let my pear hating ways get in the way of enjoying this Kit Kat. 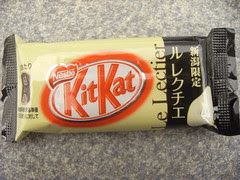 Le Lectier Kit Kat has 69 calories and is made with white chocolate. Upon opening it there was a strong artificial pear smell. Fortunately the artificial only extended to the smell and not to the taste. This mini had a nice smooth pear flavor to it that was pretty tasty. It was concentrated in the chocolate but it was there in the wafers as well. It was very sweet but not sickening. I'm not a huge fan of white chocolate but this one was definitely better than some of the other incarnations. I can wholeheartedly recommend Le Lectier if you can get your hands on it. And if you've tried a real le lectier pear let me know if they're truly better than your standard pear. I'm curious.

Or akemashite omedetou as they say in Japanese. 2010 was a good year in many respects and by my count I tried 40 new and different Kit Kats.

I have 4 flavors waiting in the wings and we're heading into testing season in Japan which always leads to lots of new flavors as Nestle tries to convince parents that they should buy their beleaguered students a Kit Kat as a token of encouragement. In the meantime start the new year off right by checking out the reviews below from some of my fellow snack bloggers.

And for a few versions I won't be trying- Orchid64 at Japanese Snack Reviews gives her take on Little Big Kit Kat Mikan (isn't little big contradictory?) and also a crispier version the Otoshidama Kit Kat.

Here's to 2011 and what I hope will be many more inspired flavors from our friends at Nestle Japan!
Posted by Jen in Japan at 4:10 PM 4 comments: