We have these convenient stores in Ohio called United Dairy Farmers (or UDF for short) that also have ice cream counters that sell UDF brand ice cream and a variety of malts and shakes. My favorite is the Orange Freeze - orange sherbet and orange juice. It's also the reason why I tend to gain 5 pounds whenever I go back to the States. I used to make a similar version in my college cafeteria with orange sherbet, orange juice, and a little bit of Sprite. It's a great summer treat - cold, sweet, and refreshing.

So why am I waxing nostalgic for UDF Orange Freezes? Well, if you put one of the Citrus Blend Kit Kats in the freezer and then ate it then you would have an Orange Freeze in Kit Kat form. I didn't expect to like these as much as I did, but eating one (or 3) made me really wish they had UDFs in Japan. 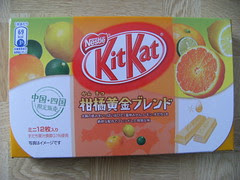 The Citrus Blend Kit Kat is a regional limited edition from Shikoku. Although I have been traveling around quite a bit lately, I still haven't made it to Shikoku but lucky for me this was offered online at the Nestle E-shop. For 840 yen I received a box of 12 mini Kit Kats. They are made with white chocolate and are colored a bright bright orange despite the fact that they are flavored not only with orange but with lemon and lime. Each mini is 69 calories. They have a generic citrus smell to them and the chocolate itself only has a very mild orange-y flavor. Most of the punch comes in the creme and the wafers. The orange flavor is not authentic but it's not bad either. Although orange is the dominant flavor, it remains true to its name and lemon and lime are mingled in there as well. They mix well in your mouth and then it ends on a sour note that is very refreshing in its own way. 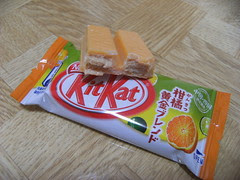 I'm still not a huge fan of the citrus-y flavored Kit Kats but if I had to choose my favorite of the bunch then this would definitely be it. I've said this before but I seem to like the citrus with white chocolate over the milk chocolate. I think the sourness of the citrus blends better with the sweetness of the white chocolate. So even though I won't tear through this box of Kit Kat minis but I don't think I will have trouble finishing them off eventually. I'd rather have an orange freeze though...

Recently I went back online to the Nestle E-shop and picked up some more regional special editions - this time from Shinshu. I should note that there are a lot more regional special editions out there that are NOT offered anywhere online. The only way I am going to get them is to get off this peninsula and buy them wherever they are offered locally. So Sendai and Nagano have suddenly made my list of places in Japan I want to see so I can pick up the Sakura Kit Kat, Zunda Kit Kat, and what I can only determine is another spicy Kit Kat. 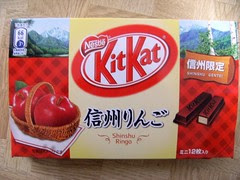 But until I make more travel plans then I will make do with the ones I can find online, starting with the Apple Kit Kat. This one comes from Shinshu, which after some very superficial internet research I learned is the old name for the mountainous region in Nagano. The regional special edition Kit Kats come in a box of 12 which looks very nice opened and plays very well into the Japanese idea of omiyage or bringing food back to the office for those poor suckers who had to stay behind and work. They tend to try to take the region's specialty food (and every town has one even my small town has its special omiyage - clam flavored rice crackers) and turn it into a Kit Kat flavor. 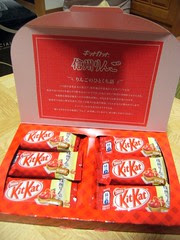 Nagano is known for apples and so it makes perfect sense that their regional special edition Kit Kat would be apple flavored. The Apple Kit Kat is made with milk chocolate and has 66 calories. I was already inclined to like it because of the milk chocolate but the subtle apple flavoring made this a truly enjoyable snack. Both the smell and the flavor are mellow and mix well with the chocolate. The apple taste is similar to that of the Apple Vinegar Kit Kat but without the sour note on the end. Since these are made with milk chocolate rather than white the sour end note isn't really needed. The taste is somewhat artificial but of all the different fruity varieties I have tried it comes the closest to the real taste of an apple. If you are a true apple aficionado then you might prefer the Apple Vinegar since the apple flavor shines through more with that bar but for me I prefer this more subtle milk chocolate version.


Check out the list of Regional Special Edition Kit Kat varieties here!
Posted by Jen in Japan at 2:50 AM 6 comments:

And now there is the Sakura Matcha Kit Kat with a convenient space on the back for you to write and encouraging message to those students studying themselves silly trying to get into the best high school/college. I like the crazy flavored Kit Kats and all but it's enough to make me eternally grateful that my parents were cool with me getting Bs in school. 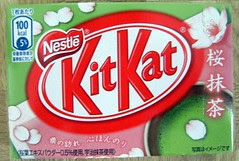 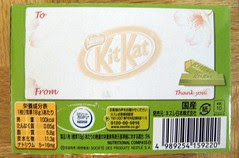 The Sakura Matcha Kit Kat is 100 calories and made with white chocolate. The chocolate itself is green tea flavored and is very similar if not the same as the special edition from Kyoto I tried earlier. What makes this one different is the addition of the sakura flavor in the creme. It is very definitely a fake cherry taste but I think that authentic cherry flavoring is very hard to come by so I will forgive Nestle this time. Besides it reminded me of the berries in Cap'n Crunch with Berries cereal so it was both natsukashii* and oishii**. (Am I the only one who used to get mad at their mom for buying plain Cap'n Crunch with no berries because it's no good without the berries!) 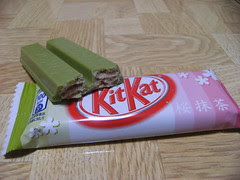 Overall I was very pleasantly surprised. I've given a begrudging thumbs up to other green tea varieties but this one is by far my favorite of the lot. If you're looking for something to encourage a poor overworked student then I suggest giving them some fish sticks (it's better brain food than chocolate after all) and keep this Kit Kat for yourself.

For Christmas this year my mom sent me a huge package that contained all the fixings for "her" chili because I had made an offhand comment about really wanting some of her chili now that the cold weather had settled in. Unfortunately the box of chili powder exploded en route and I wondered for a moment if she hadn't poured red glitter in the box in an uncharacteristic bout of holiday cheer. Then I started sneezing and realized what had happened. I spent the next week vacuuming up red chili powder. Some of it apparently made its way into my Kit Kats as well. And let me tell you that chili powder with beans, onions, and hamburger is not the same as chili powder with chocolate and wafer cookies.

This isn't the first spicy Kit Kat incarnation I've tried and I'm very slowly coming around to the idea that hot and spicy and chocolate can go together. The Wasabi Kit Kat was a little overwhelming but the Yuzu Kosho Kit Kat was one of my favorites. The Chili Kit Kat, however, left something to be desired. 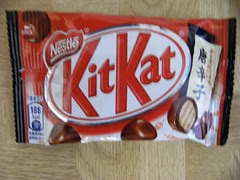 The Chili Kit Kat are really Kit Kat mini balls. Upon opening there is no real smell other than the generic sweetness of chocolate-no hint of the fire to come. (This by the way makes it the perfect thing for older siblings to innocently offer to younger siblings...not that I would ever ever do something like that.) There is no real chili taste in the initial bite either...just chocolate and then... BAM! Hot balls of chocolate! It hits you! It's pretty hot and it took me a little time to get used to it but by the end I was sort of digging it. But don't be fooled. It's just heat. The chili adds no extra flavor and that is really disappointing. If you want a little extra spice in your Kit Kat then I suggest trying the Yuzu Kosho or the Wasabi first.

I probably wouldn't buy these again (even if I could find them because man it was hard to track these suckers down) but it was a nice novelty.