Mangoes don't really rate high on my list of favorite fruits. This probably has something to do with the cost and availability of them. I once saw a mango selling for $80 in Tokyo and I don't think I've ever seen them in Tahara. But despite not especially liking mangoes, I was excited to try the Mango Pudding Kit Kat.

It came in a mixed pack of minis with a couple of mini regular chocolate Kit Kats. When you open the package you can really smell the mango. This is another white chocolate kit kat and it's colored a very bright orange. If it wasn't for the nice aroma the color might put one off, but luckily it tastes as good as it smells, with the mango flavor mostly concentrated in the chocolate. Overall, it was a pretty good taste. Like I said, I'm not a huge mango fan so I probably won't be buying anymore Mango Pudding Kit Kats, but for a one off I have to give it two thumbs up. 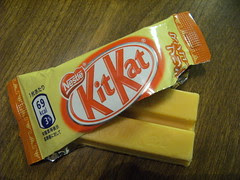 If you remember from my Soda Kit Kat review I was confused about which soda Nestle was trying to emulate with this candy bar. I guessed Creme Soda at the time but that was because I hadn't done my research. It's true that if you type "ramune" into a Japanese dictionary it will return the result of "soda" but that doesn't fully explain what "ramune" is. After my friend Miyuki tried the Soda Kit Kat and told me it tasted just like "ramune" did I even think to look into it more. 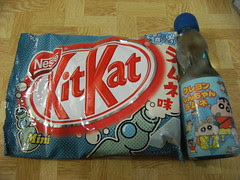 Turns out ramune is a popular Japanese soda sold in summertime. It's a lemon-lime flavored pop that comes in a special codd-neck bottle with a marble that floats around inside (and sometimes knocks you in the teeth if you aren't careful.) The word "ramune" is actually a very poor rendering of the English word lemonade into Japanese. (This makes more sense if you remember that R's and L's sound exactly the same in Japanese.) Once I realized I had missed a pretty vital piece of the Soda Kit Kat puzzle, I decided it was time to try again. How exactly did the Ramune Kit Kat stack up against a bottle of Ramune? 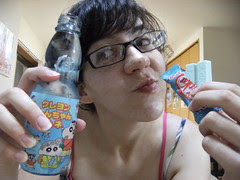 The Kit Kat had just as strong an aroma as I remembered. And upon smelling the ramune I decided that I was a little off with the creme soda; it definitely smelled very similar to ramune. The taste was a different matter. The ramune did have a lemon-lime flavor but it wasn't a very strong flavor and it wasn't as fizzy as I generally expect pop to be. Overall it tasted like a watered down Sprite - not exactly my favorite. The Ramune Kit Kat on the other hand had a much stronger flavor that I really enjoyed. It was sweet, sour, and even a little fruity. Others have said they thought it tasted like bubble gum but I still think it reminds me more of Fruity Pebbles cereal than bubble gum. I think I might have liked the ramune better if it hadn't tasted so watered down, and it might just be a case of me needing to try a different brand. But for now the Ramune Kit Kat wins in a contest between the two.

On a side note I've also tried the Soda Garigarikun (a popular popsicle that also comes in many flavors) and while it doesn't come anywhere close to the awesomeness that is the Pineapple Gargarikun, it is still pretty tasty. I can only conclude that the Japanese idea of "soda" taste is something I like.
Posted by Jen in Japan at 2:26 AM No comments:

I'm back in America for the next six weeks for summer vacation. Don't worry though, there are still Kit Kats to be blogged about since I'm way behind in posting. Coming soon we have Mango Pudding Kit Kats and a Soda Kit Kat Redux. And who knows, maybe I'll find some new flavors here in my home state of Ohio! (I'm not holding my breath but my friend Nathan swears he found an Orange Creme Kit Kat in the States once.)

Kit Kats aside, I'm happy to be home with friends and family and where people eat wheat bread. The best part though about having a candy blog...people buy you candy! Look what I found waiting for me on my bed when I got in last night. Sometimes it's good to go back and enjoy a classic. Thanks mom! 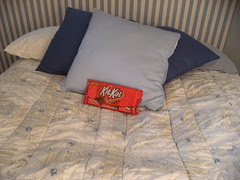 I reviewed the Espresso Coffee Kit Kat awhile back and I wish I could still find some in the stores because I would love to eat the Espresso Coffee and the Tiramisu Kit Kat one right after another just to see if there really is any difference. Having eaten them a month or so apart my guess right now is no and they just changed the packaging.

The Tiramisu Kit Kat is white chocolate with the coffee flavor concentrated in the wafers. It smells like tiramisu and it tastes very close to it. Where the Espresso Coffee Kit Kat fell short with the choice of white chocolate, this time the white chocolate enhanced the flavor. But in the end it still tasted a lot like the Espresso Coffee Kit Kat. Either one would make a great snack with a cup of coffee, so despite my suspicions I give this one two thumbs up.
Posted by Jen in Japan at 5:38 AM 5 comments:

I stated quite vehemently in my review of the Rose Kit Kat that roses should NOT be eaten...ever. And I'll admit I was a little confused on who exactly thought it would be a good idea to make a rose flavored Kit Kat. Apparently it's the same people who buy this. 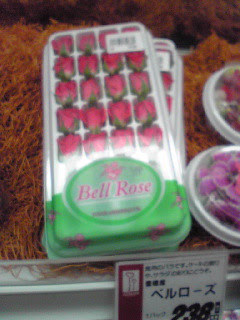 Those are roses. And no they aren't in the flower section of the supermarket but the salad section right next to the mixed greens. Maybe if I was braver I would try them on my next salad, but I maintain that roses are for looking at and not for eating. The Rose Kit Kat which tasted like soap is a testament to that. But maybe, and this is a very big maybe, they taste better on salad. Tell me, Japanese friends, do you eat roses? Oishii?
Posted by Jen in Japan at 8:15 AM 9 comments:

Kit Kat in a can

You can get hot drinks, cold drinks, and sometimes even ice cream in vending machines in Japan. But they don't sell junk food or candy because walking and eating is discouraged in Japanese culture. Until now. Kit Kat has started offering their bars through vending machines. The only problem is that most vending machines aren't set up to sell candy bars. They're only really for drink cans. But they work around it by just putting the candy in a can. That's not Kit Kat flavored soda you see there, but a can of candy. (But oh my word I would totally drink Kit Kat soda just for novelty's sake.) I haven't seen one here in Aichi yet, but they've been spotted in Tokyo. I won't be up that way until September to even look for one but until then enjoy this review from orchid64 at Japanese Snack Reviews. 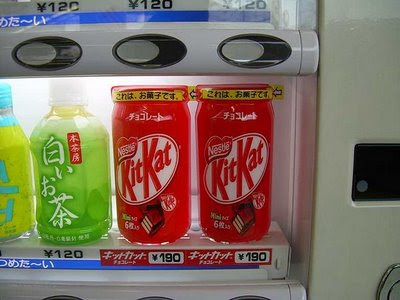