It's getting harder and harder for me to buy Kit Kats. When I was in Japan I could rationalize purchasing just about anything. I would buy Strawberry Kit Kats with only the slightest of variations if I found them in the 7-11 across the street. Purin Kit Kats in different incarnations - Chunky, Little, Mini, Regular from the Sunkus next to Toyohashi Station were a snore after awhile but they were there so why not?

Now that I'm back in the States and buying my Kit Kats online the thought of paying shipping for yet another Purin or Strawberry Kit Kat isn't as easy to rationalize. The latest craze in the Kit Kat world is releasing existing flavors but as Big Little Kit Kat. Big Little is pretty much the definition of an oxymoron and not enough of a twist to convince me to spend the money on international shipping. I did shell out for the Mikan Big Little Kit Kat but it will be my last. Only truly new flavors from here on out - or until I go into Kit Kat withdraw.

I did break down and buy the Mikan Big Little Kit Kat even though I've had other orange Kit Kats before. I rationalize it by telling myself I haven't had mikan yet. But still, it's really nothing very new. I challenge Nestle to wow me with some truly new flavors that I can get excited about.

But until then...the Mikan Big Little Kit Kat has 224 calories. In my little pack I got 9 large milk chocolate cubes. It's hard to tell if these are really bigger since I don't have a Little Little Kit Kat to compare too but I'd say the difference is minimal. They smelled orange-y although it was more of a kitchen cleaner citrus smell than of a ripe juicy mikan (mandarin orange). The taste was less artificial and really more of an afterthought rather than a dominant flavor, which I actually approved of. The cream was very creamy. The milk chocolate paired nicely with the orange flavor for an overall great tasting snack. 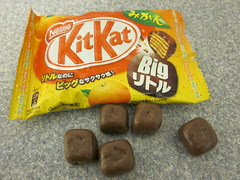 I've had other orange incarnations but this might be one of my favorite. It actually makes me wonder if I shouldn't go ahead and just buy more of the Big Little versions after all. Thoughts?


This is my first post since the quake and tsunami in Japan. I hope that any of my readers living in that area are safe and sound. Personally, I'm relieved to report that all friends and acquaintances are safe. My thoughts and prayers are with those in the quake zone and I encourage you to donate to the relief effort, specifically to the Japanese Red Cross.
Posted by Jen in Japan at 5:57 PM 9 comments: