We don't have Royal Milk Tea in America. And I'm pretty sure they don't have it in England either, despite the British guards marching around on the outside of this box. But that isn't to say that milk tea isn't delicious or not worthy of having its own Kit Kat flavor. I often drink milk tea in the winter. It's easy to make - two heaping spoonfuls of powder in hot water and you're ready to go. And if you're feeling poorly a fellow teacher of mine suggested milk tea with a squeeze of ginger as a cold remedy. You can also drink it cold but so far I haven't tried that, but my friend Masako orders it when we go out for dinner. 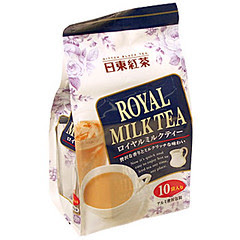 The Royal Milk Tea Kit Kat is again white chocolate with each bar being 100 calories (2 bars per box.) It smells just like the tin of milk tea powder I have sitting in my kitchen currently and the taste is spot on. A darker chocolate wouldn't have given it that dehydrated milk taste that you get with the real thing. Overall, it borders on being too sweet but then the drink it's based on is also fairly sweet, so really this taste combined with chocolate makes for a great Kit Kat.

I washed it down with some regular old black tea. I wouldn't recommend drinking milk tea with it just because then you would have milk tea overload and you might go into a sugar shock due to the sweetness but paired with a slightly more bitter drink, like black tea or coffee, then this is the perfect afternoon snack. 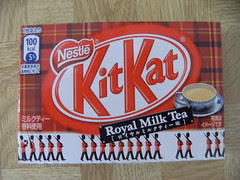