Until I came to Japan the only thing I knew about aloe vera was that it's good for sunburns but apparently you can eat it. They put it in yogurt here in Japan, sometimes by itself and sometimes chunks of aloe mixed in with your regular fruit yogurt. I've always shied away from eating it because, well, the idea of eating something I previously only thought of as a topical medicine didn't sound appealing. It still didn't sound appealing even after I saw the latest Kit Kat mini - the Aloe Vera Yogurt Kit Kat. They sat in my kitchen while I ate every other Kit Kat and snack I had while I worked up the courage to try it. 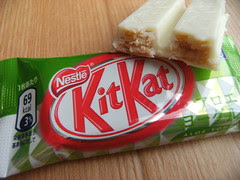 The Aloe Vera Kit Kat comes in a bag of 12 minis. Each is 69 calories. They are tinted a greenish color and smell like a bad sunburn. I didn't get a good sense of any yogurt, which is too bad. Mostly it had a very sweet white chocolate flavor with a hint of something else. Since I don't eat aloe vera often I'm assuming that's what it was. It had a sharpness to it and tasted slightly medicinal although that could be my preconceptions of aloe vera getting in the way. It wasn't bad but it wasn't something I want to try again, especially since the aloe vera hung in my mouth long after I finished the bar.

I wouldn't recommend this to anyone unless you are accustomed to and like eating aloe vera or you are feeling adventurous.